Alloy Pittsburgh: Out & About When Alloy Pittsburgh returns to the Carrie Blast Furnaces later this summer, it will be the fourth iteration of the site-specific art installation. Six local artists are currently immersed in a three-month residency that will inform the scope and process of their work, but this year is unlike any other.

The shadow of the pandemic looms large. It is hard to say yet if the collective traumas of the last year or so will be evident in artworks themselves—they are still being created. What we do know is that the process of creating the works has seen some challenges. For one thing, the exhibition was delayed; when it opens on Saturday, August 28, 2021, it will be just about one year off schedule. Beyond that though, the scope of the residency itself changed dramatically.

For the first time, Alloy Pittsburgh artists were to go beyond their residency experience at the Carrie Furnaces themselves—they were to be embedded in neighboring communities. Each artist was to be partnered with a community-based organization adjacent to the Furnaces. Their work was to be informed by not just the history of the site, but by the generations of people living today whose communities are now deindustrialized.  As one can imagine, the pandemic changed what organizations could do in partnership with the artists, how people could interact within their spaces, or if they could even participate at all.

Fortunately, both artists and arts administrators are quite resilient, so by June of this year, each of the six artists had found a home for summer exploration. Now, we are happy to report, these community connections have begun!

Check out the photo essay below to learn more about three of the six artists—and read about how you can get involved!

Reba Harmon is a rust belt born and raised visual artist, living and working in Pittsburgh. This summer, she has partnered with the Three Rivers Village School in Hazelwood. In June, she toured the Furnaces with a small group of local students to experience the site with them. Afterwards, they had a hands-on experience working with her, helping to knit the fabric that will be used in her installation at the Carrie Blast Furnaces. This relationship with the students has been an ongoing part of her residency.  Reba’s piece at Carrie aims to foster new community relationships while reconnecting with the historical role of women in the steel industry. She says, “knitting illustrates a dichotomy: a media used in domestic craft backdropped by the industrial space accentuates women’s presence and role in the steel industry, while acknowledging the struggle to find acceptance therein.” You can check it out for yourself! Join Reba, along with Artist Excursions Unlimited at Elizabeth Street Parklet in Hazelwood, Elizabeth Street Parklet, Elizabeth and Gloster Streets, 15207, on Friday, July 23 from 4:00 – 6:00 p.m. You can experience her process and help create the artwork that will be installed in the Hoist House of the Carrie Blast Furnaces. You can also catch up with Reba during the Open Streets event in Hazelwood on Sunday, July 25.

While Bradford Mumpower’s career history has been varied, he couldn’t escape the pull of “creating” things. In 2010, a sewing course inspired him and set him on the road towards fashion design. His concept for the installation at the Carrie Blast Furnaces is inspired by the “greens” that workers wore while on the job, scaled to size proportionate with the historic importance of the site itself. 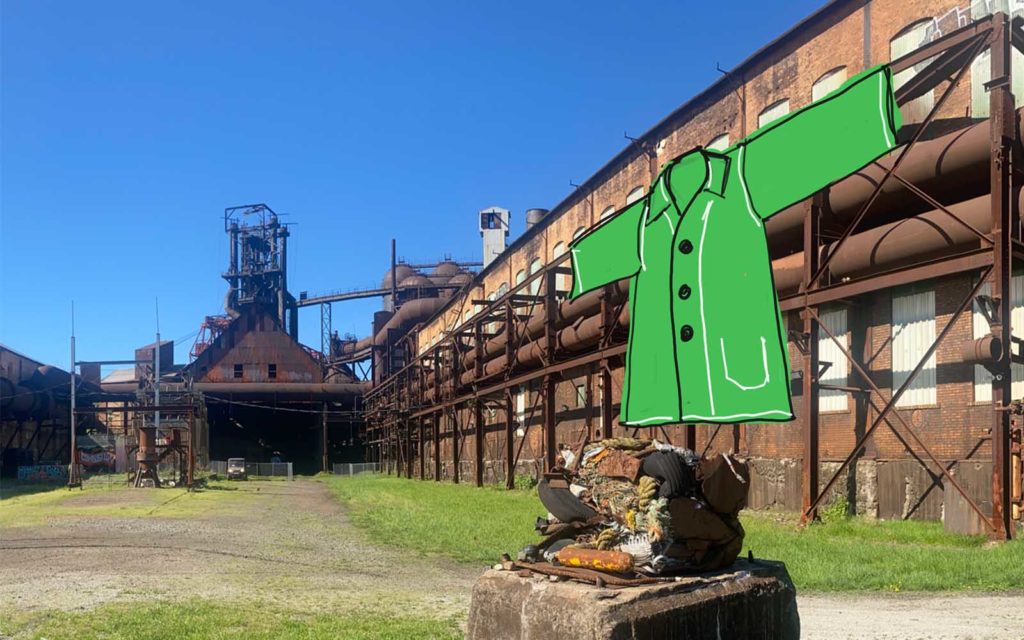 From the image below, you can see the beginning of the shirt spread out adjacent to the place where it will be installed. The larger-than-life replica of the jacket is almost ten yards from the high point shoulder to the bottom hem, and about 20 yards from end of sleeve to end of sleeve with the jackets arms outstretched. Bradford is in residence at the Wilkins School Community Center, 7604 Charleston Ave, Pittsburgh, PA 15218. Stop by there on Sunday, July 25 from 2:00 – 5:00 p.m. to meet the artist, ask questions, discuss the project, and find out ways you can help work on this art project.

Lori Hepner is an artist working primarily in photography, new media performance, and public art in community centered projects. Her project for Alloy Pittsburgh explores the connection that the Carrie Blast Furnaces have with the surrounding communities via the air above it.

“My inspiration for the project came from thinking about the Carrie Blast Furnaces as a specific site: pressurized air made the transformation of raw materials into something that could be used for industrial purposes,” said Lori. “The air from the sky above was drawn in through the large air duct pipes that can be seen throughout Carrie, some of which blocked out the actual sky from those working there. Now that Carrie is a non-active site, the air above us floats in from the surrounding communities rather than the pollution from the active site floating out.” Pipes at the Carrie Blast Furnaces.

Lori’s process for creating this work directly engages the community in the process. Recently at Doors Open’s June 28 Homestead Event, Lori invited the community to collaborate to visualize themselves, along with their families and friends, as part of her project, entitled The Air Above Us.  Participants used 6’ light-wand, along with photographs of the sky above them, to create images that will be incorporated in the project, in the process allowing event-goers to becoming light artists. The Braddock Carnegie Library Association is the community organization that is hosting Lori, so naturally she also worked with children there to create images to use in the final project, which will take the form of a mural. Taking inspiration from the graffiti works onsite, the digitally created decal mural will be allowed to age in place. However, Lori also has plans for an interactive aspect of the installation—to use augmented reality to form the final presentation of the piece. Check it out for yourself at the Alloy Pittsburgh opening reception on Saturday, August 28 or during one of the exhibition tours scheduled for Friday, Saturdays, and Sunday in September. For more information about Alloy Pittsburgh, visit the Exhibitions page or review the April 29, 2021 news release.

Additional support has been provided by the Fine Foundation and the Claude Worthington Benedum Foundation.