By Carly McCoyOctober 1, 2020Blog
No Comments By Suzi Bloom, Director of Education   |   Image of a barge on the Monongahela River by Adam Piscitelli, 2016. While towboats and barges are not unique to Pittsburgh, there’s nothing quite like seeing a barge gliding through the early morning river fog. To me, it is one of the more iconic images of our working rivers. The powerful towboat and companion barges synonymous with the brawniness of Joe Magarac as the operation appears to glide effortlessly through rivers that have long been integral in the building of America.

Barges have been used to transport coal and other goods along Pittsburgh’s rivers for well over the past 200 years. The concept of a boat pushing what is essentially a floating box may seem antiquated, but barge transportation is still competitive with other forms of transportation, like railroads and semi-truck trailers. In fact, water transportation for dry bulk goods is one of the cheapest and most energy efficient means of transport.

The first transport of coal by barge on the Monongahela and Ohio Rivers was in the late 1700’s. However, barge travel during this time was not easy. With barges sitting so low in the water, transportation was limited to rainy seasons when rivers were deep enough to keep barges from running aground. During the dry season, when the rivers could become as shallow as a foot, industries dependent upon barge’s cargo were required to use other methods of goods transportation or they shut down. Postcard of “Coal Barge Scene in Pittsburg Harbor” depicting coal barges at the Point with the old Point Bridge and the Smithfield Street Bridge in rear, pre-1919. Collection of Rivers of Steel.

The first barges known as coalboats were powered by the river current and, as their name implies, only transported coal.  Coalboats were rectangular wooden vessels that were approximately 100 feet long by 20 feet wide and 6 feet deep.  They could carry up to 330 tons of coal and required a river depth of at least 7 feet. Many coalboats often wrecked on the journey, but for those that made the trip, the coal was unloaded and the boat itself dismantled and sold as lumber.

The invention of steam-powered boats was a game changer for river transportation. Coalboats were tied to steamboats for both up and downstream travel. Steamboat operators experimented with both the pushing and pulling of coalboats and ultimately determined that pushing was most effective

Southwestern PA was home to many shipyard companies that supplied the market with steamboats. From 1811-1888 boatyards along the Monongahela River alone produced more than 3,000 steamboats, with notable large-scale operations in Brownsville, PA. United States Steel’s sternwheel towboat, the Homestead, pushing coal or coke. Mid-20th-century image from the collection of Rivers of Steel.

In conjunction with the invention of steam-powered vessels, I would be remiss not to provide a brief history of the engineering efforts to increase the navigability of our waterways. U.S. Congress recognized the commercial value of navigable waterways and in 1824 authorized the first civil works mission assignment to Army Corp of Engineers to remove snags and obstructions from the Ohio and Mississippi Rivers. Construction of small wing dams and dikes took place on the Ohio River to concentrate flow, but the need for a deeper river channel remained an issue. Additional small-scale lock and dam construction took place in the early 1840’s, but the turmoil of the Civil War stalled further development.

Progress reinstated on waterways improvements shortly after the war. Philadelphia native, William Milnor Roberts, a civil engineer who began his career in 1825 at the age of 16 and later became known as the “Genius of the Ohio River Improvement,” was promoted to the Superintendent of the Survey for the post-war Rivers and Harbors Act that concluded in 1869. Roberts’ career achievements had a major impact on the success of the commercial transportation of goods on the Ohio and Mississippi Rivers. He worked in both the canal and railroad industries and his work on the Harbors Act concluded that the following actions were the most critical improvements necessary for Ohio River navigation:

The general substitution of fleets of barges for the former single steamers, or the plan of floating boxes. It is reasonable to believe that after a while a large proportion of the steamers engaged in freighting will be low-boats, running in connection with barges. Some single steamers will of course still be useful in carrying on the local passenger and freight business between the numerous commercial points along the river…;but the bulk of the freighting will probably be ultimately carried on by means of barges towed as steamers.

Locally however, the first lock and dam built by the Army Corp of Engineers at Davis Island opened to the public in 1885. Modern day barges are still essentially just floating platforms (now made of steel), that carry a variety of commodities and consumer goods such as coal, wheat, barley, corn, petroleum etc. Barge use can be slower but serves to maximize carrying capacity.  Barges themselves typically still do not have engines and are still pushed or pulled by a tug or tow boat. Tug or tow boats are usually powered by diesel or sometimes natural gas and even hybrid engines.

Towboats and barges are manned by a crew, which typically consists of 11 members including a captain, a pilot, a chief engineer, an engineer, a mate, a watchman, four deckhands, and a cook. Oftentimes shifts rotate onboard every 6 hours with the captain and pilot taking turns steering the vessel.

To return to the subject of maximizing carrying capacity, a typical 15-barge tow has the same dry cargo capacity as 1,050 Semi Tractor-Trailers. This carrying capacity helps to reduce landside highway traffic as well as emissions from trucks. The drawback to the system is that these barges are limited to the rivers that are navigable; modern day barges require a navigable river channel of at least 9 feet deep to accommodate the draft of a full vessel.

Fortunately, many navigable waterways lead to some of the most productive states. The Mississippi and Ohio Rivers and their associated connections make up the majority of navigable waters in the United States. This leads to several waterways to choose from considering those waters stretch all the way to the Great Lakes. 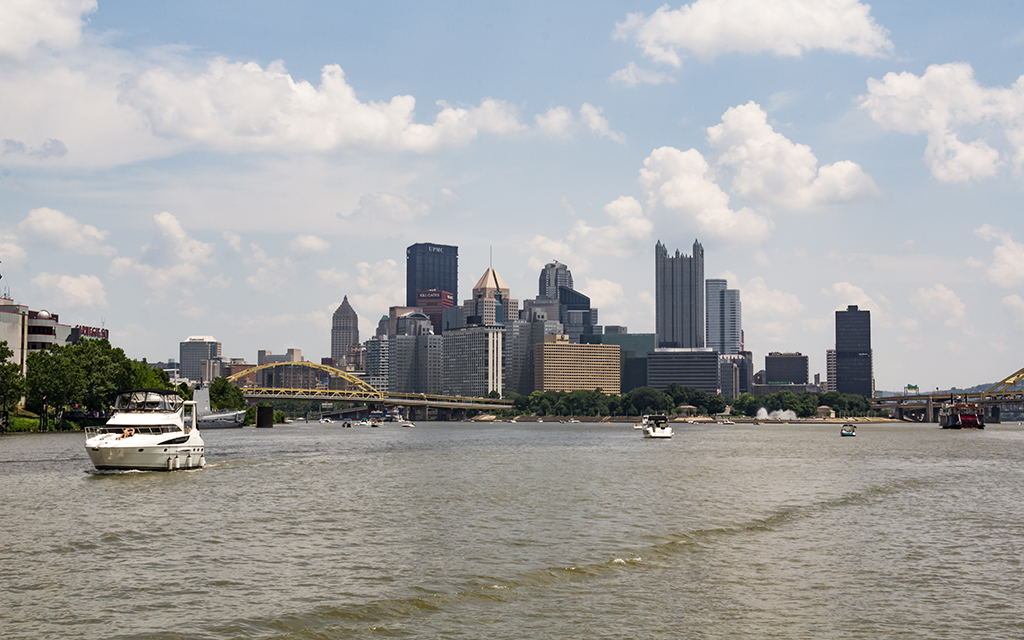 A view of downtown Pittsburgh from the water with recreational boat traffic.

The Port of Pittsburgh itself is the fourth busiest inland port in the nation. According to 2014 data, each lock on the Monongahela and Ohio Rivers handles about 9,000 barges per year. All 200 miles of commercially navigable waterways in southwestern Pennsylvania are in the Port of Pittsburgh District, which encompasses a 12-county region.

In Pittsburgh, some barges have even been repurposed and used as attractions, such as the floating “boardwalk” that was once moored on the Allegheny River from 1991-2008 and was home to bars like Donzi’s and Tequila Willies. That particular barge eventually was shipped in two pieces down the Ohio River to Chattanooga, Tennessee where it was to be used again for an entertainment venue that never came to fruition.

The Port of Pittsburgh is now part of The Marine Highway Program, which promotes the expansion of America’s navigable waters. Some of the public benefits of the program are the job creation, reduction of landside congestion, emissions reduction, and highway maintenance cost reduction.

The next time you see a towboat muscling a barge full of materials through our beautiful city, I hope you take a moment to appreciate the ingenuity and carrying capacity of barge transportation.